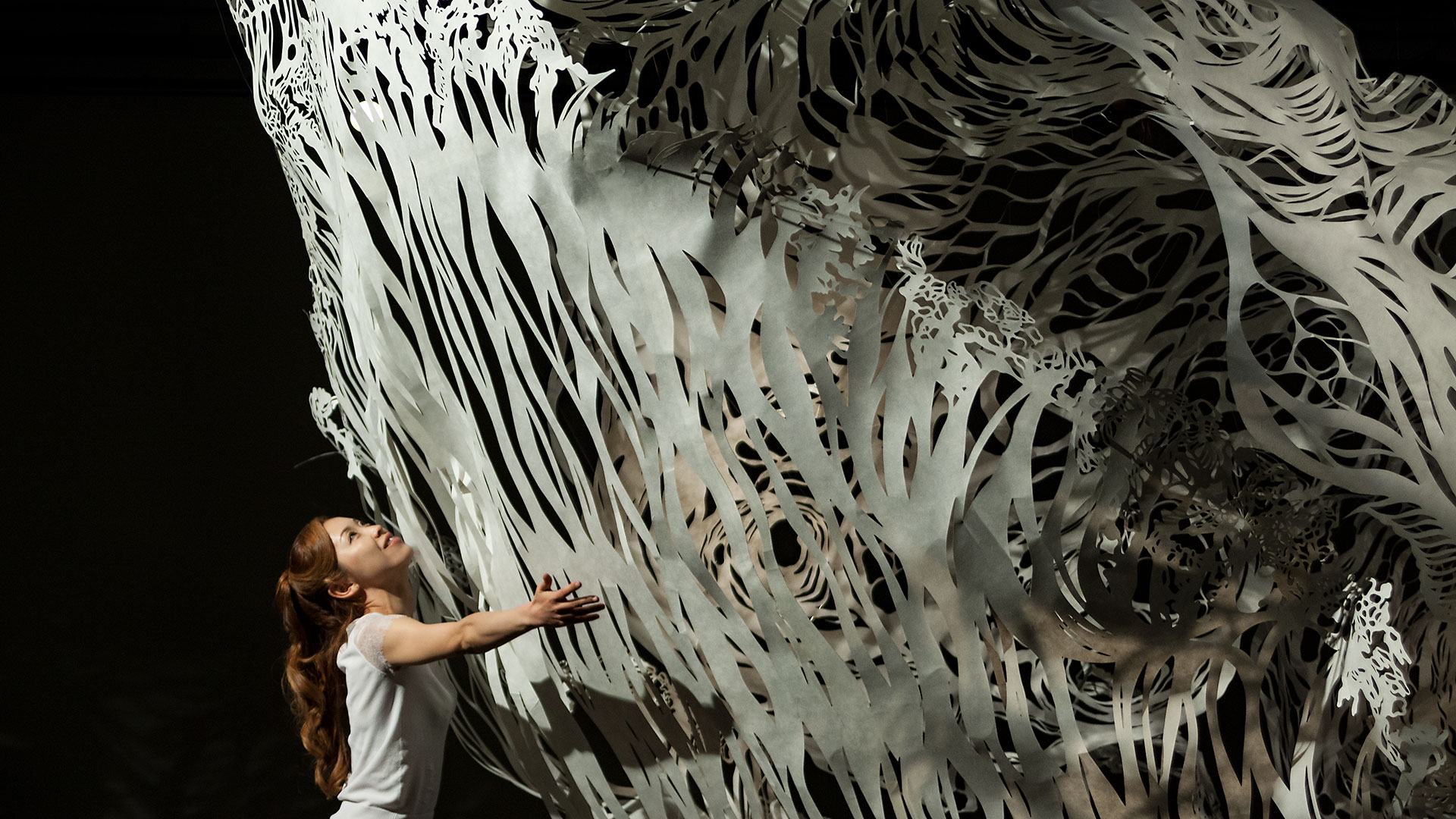 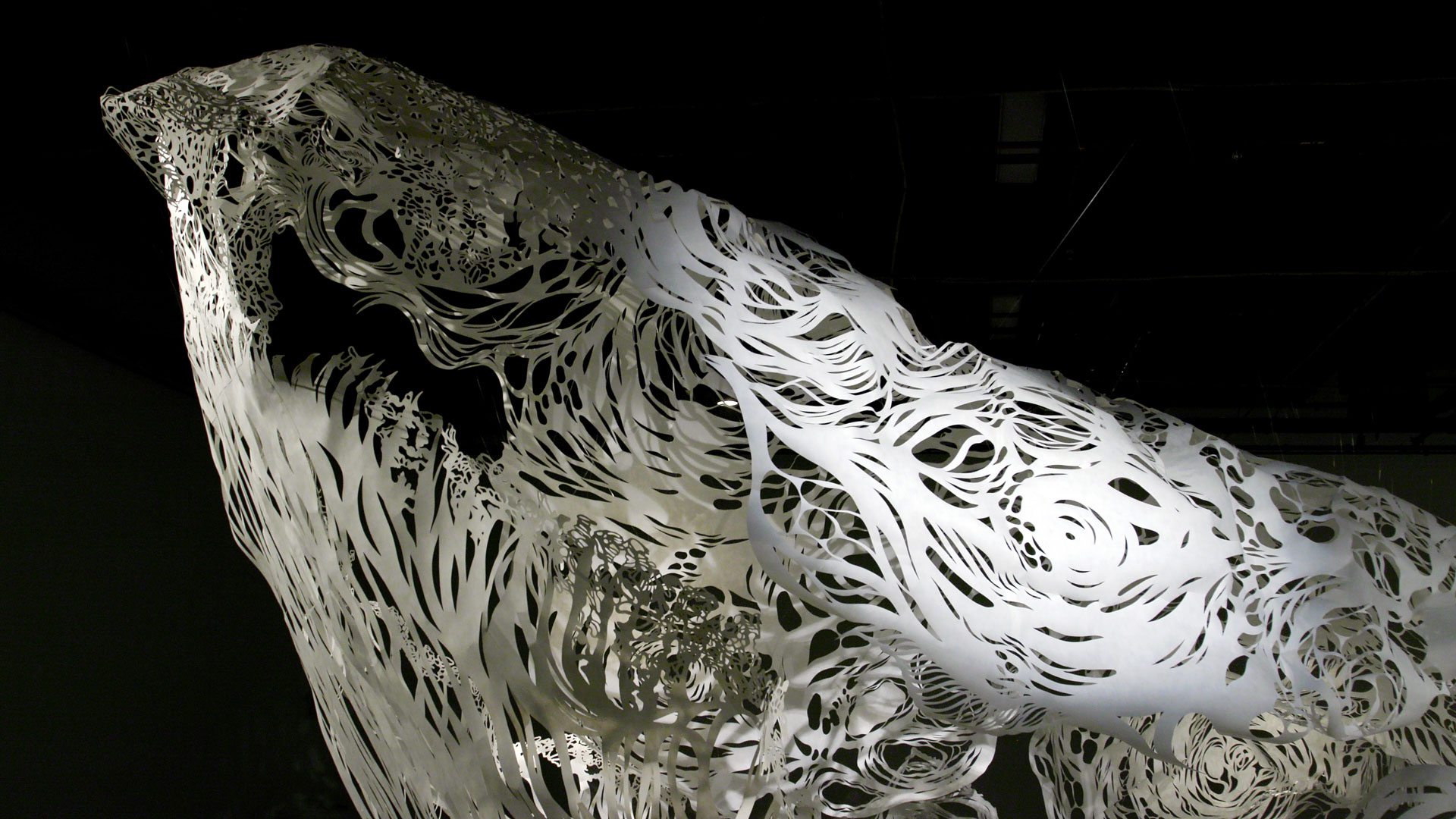 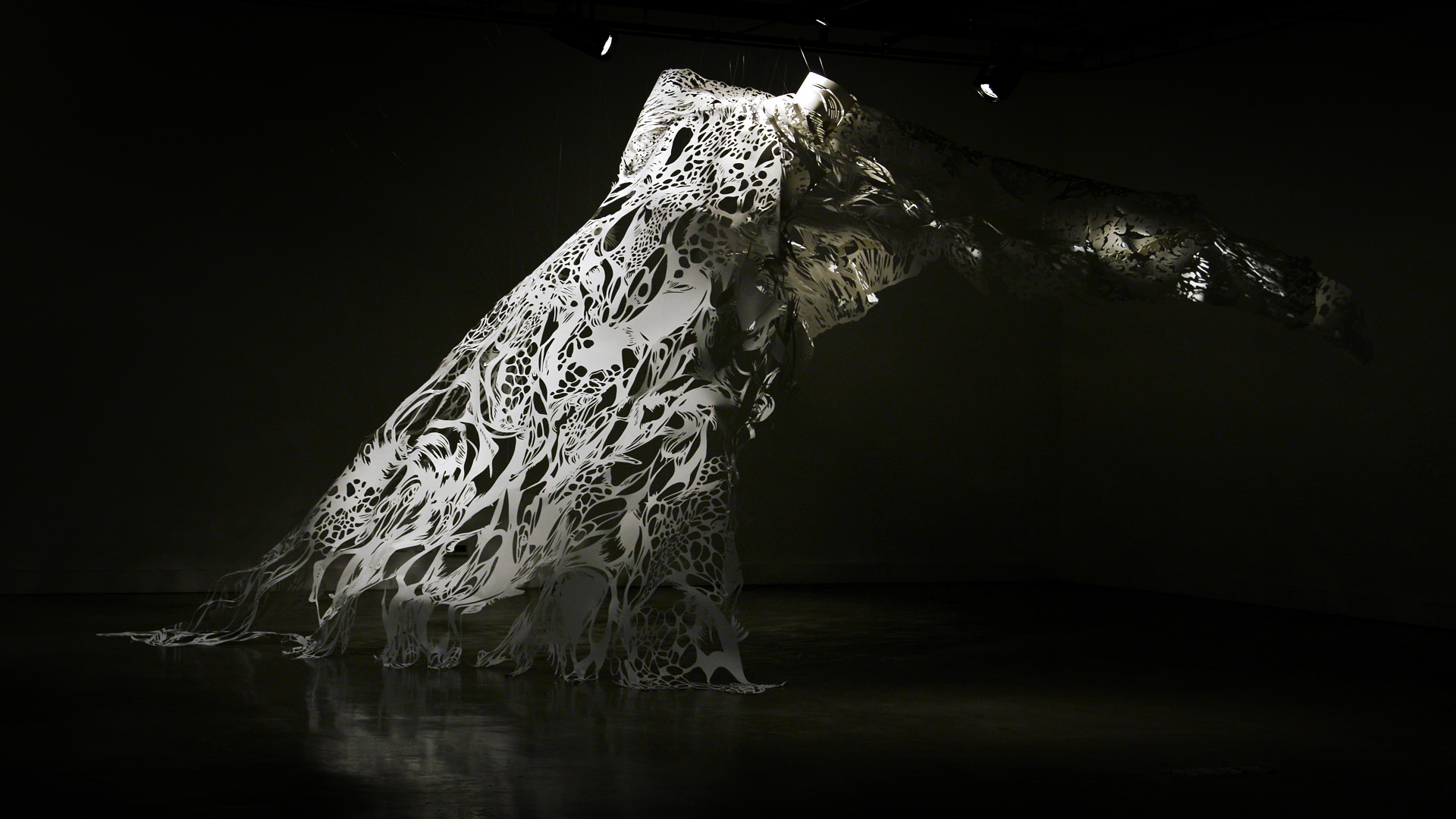 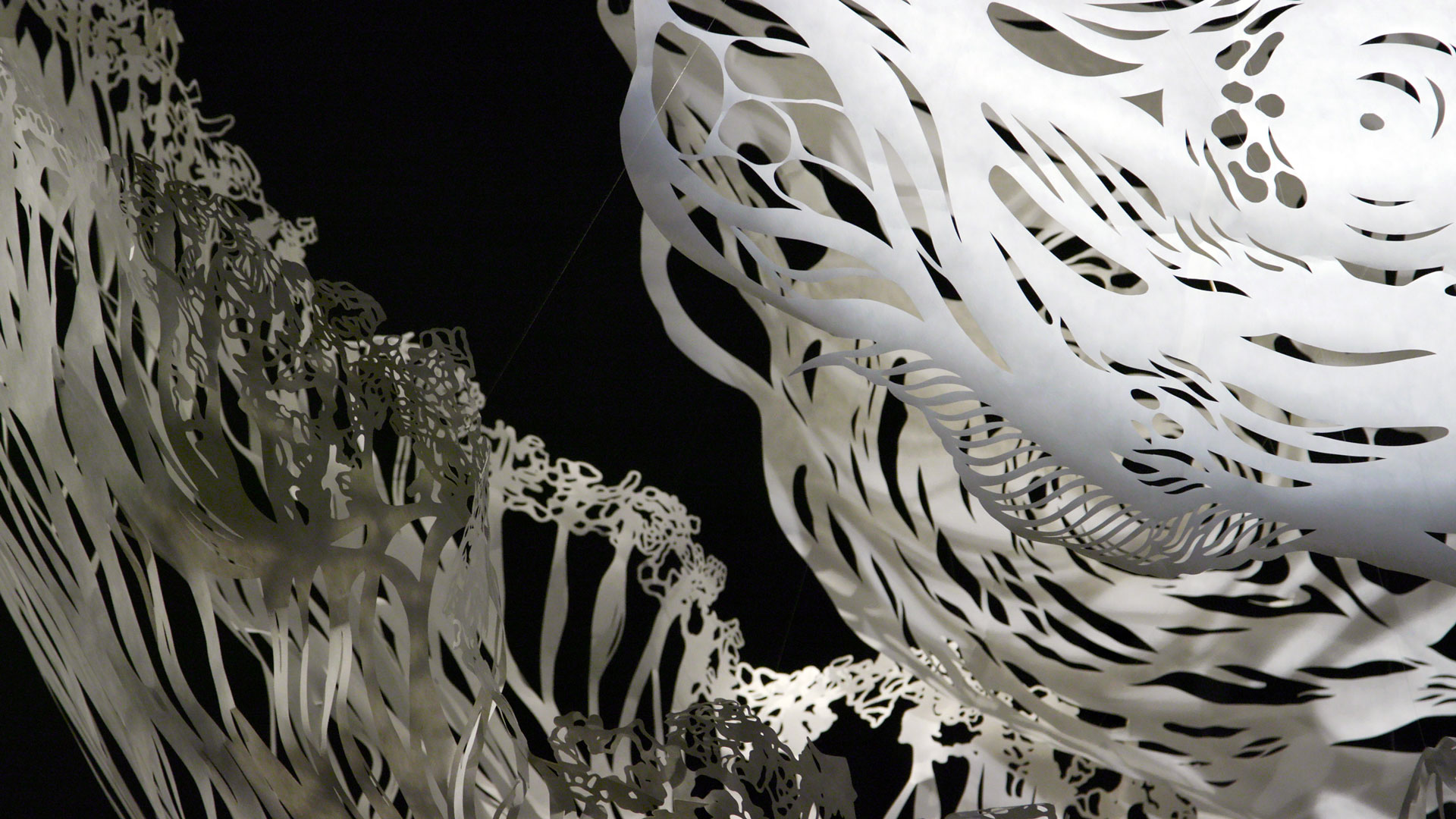 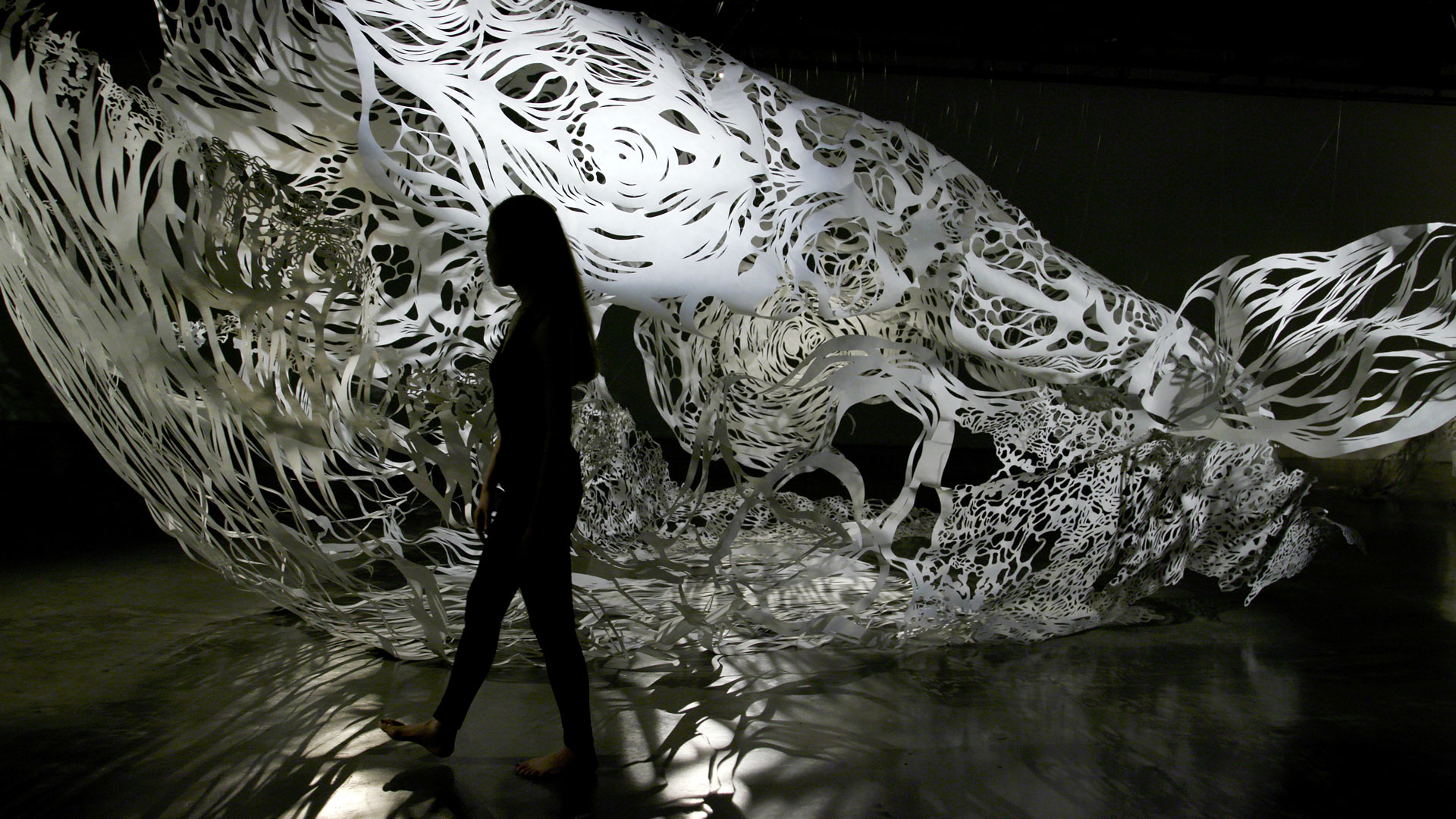 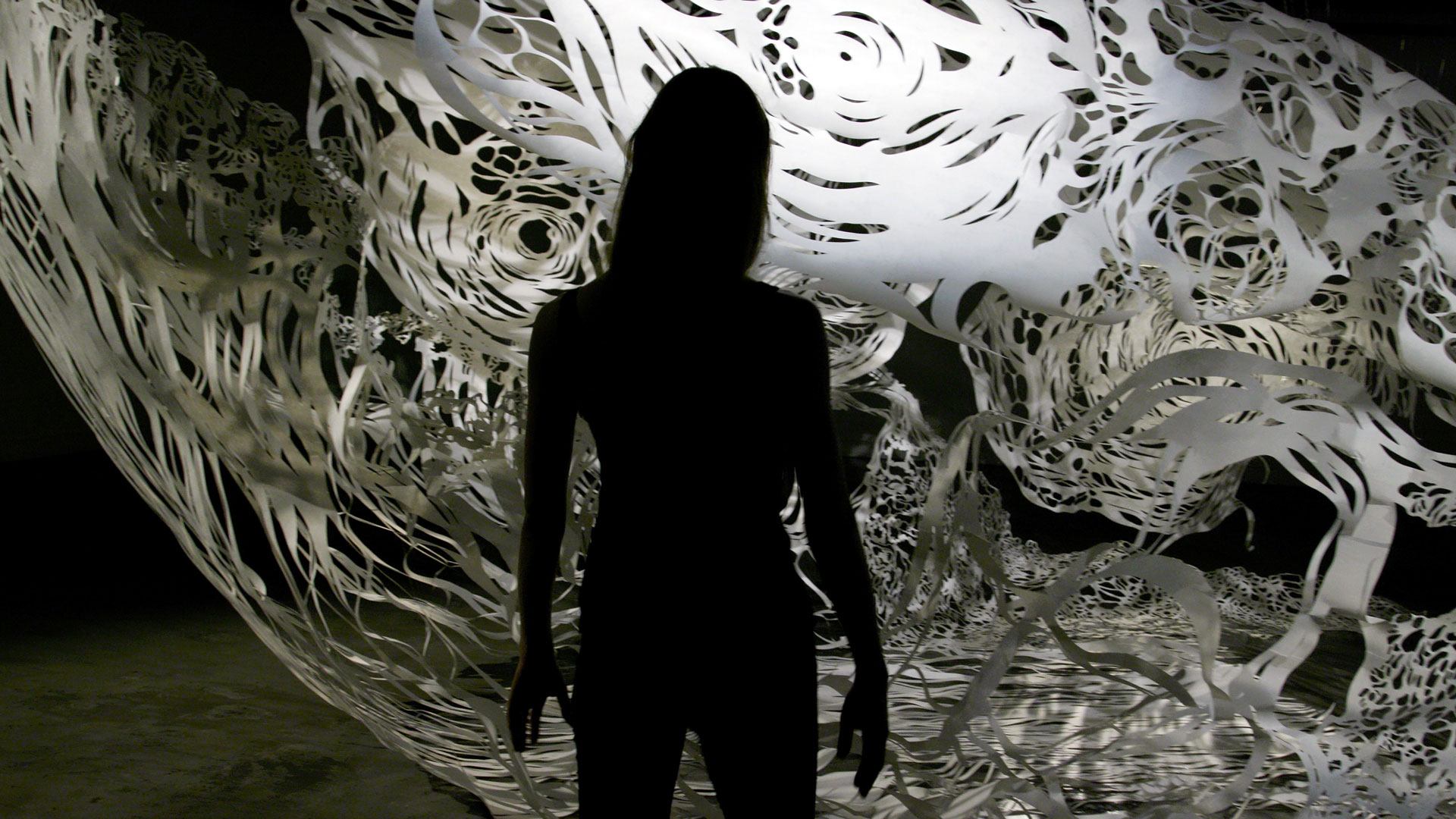 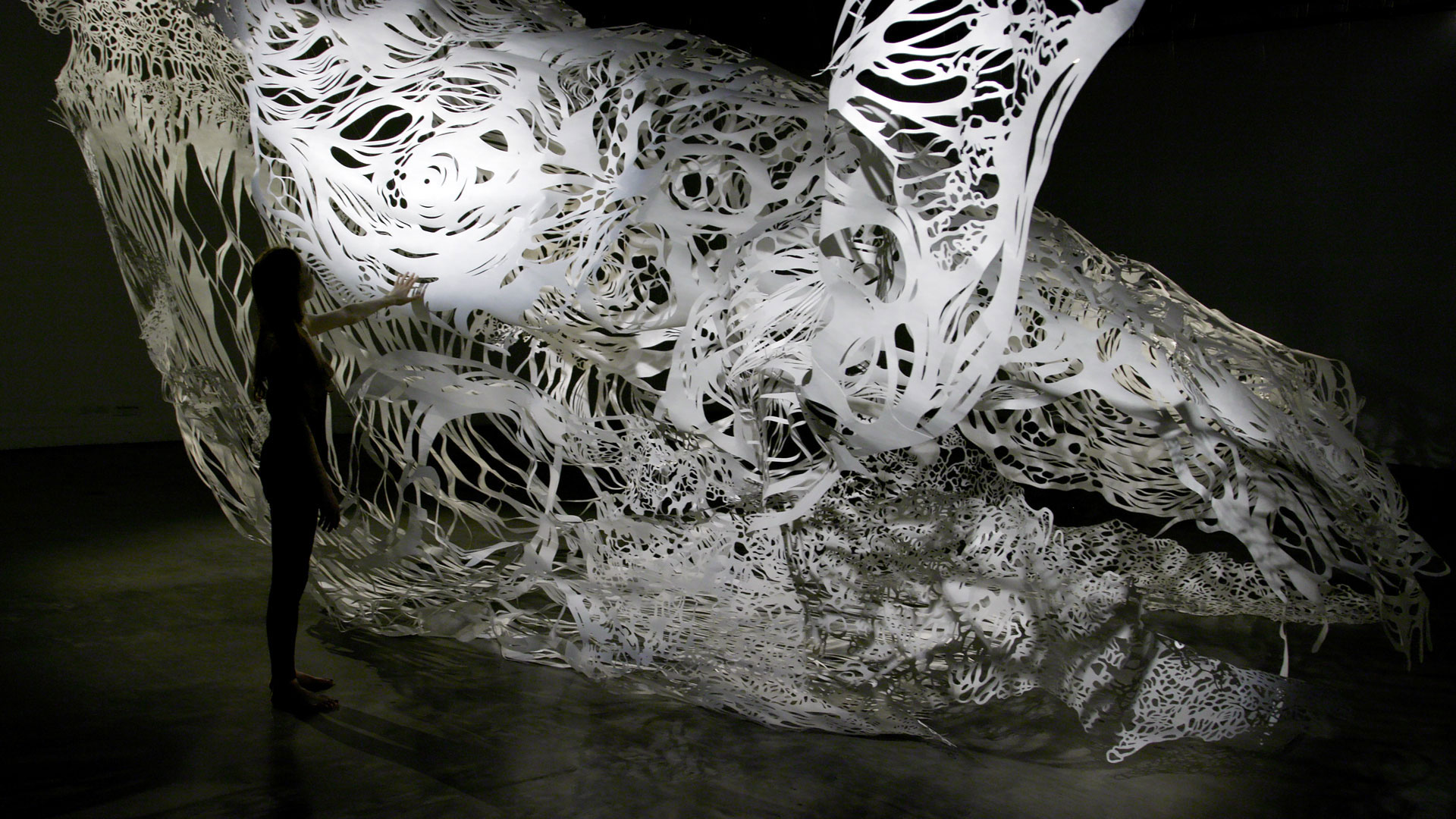 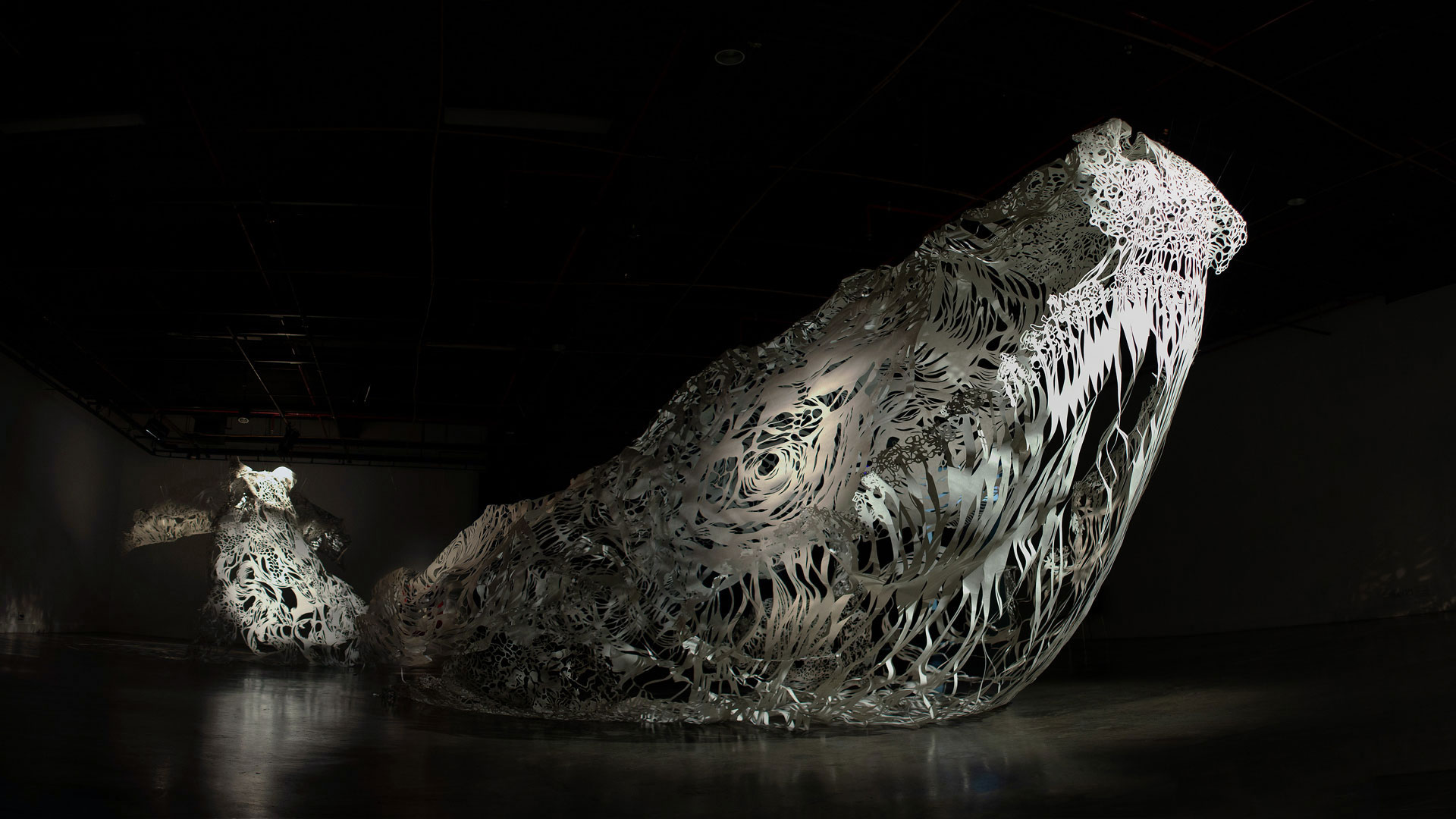 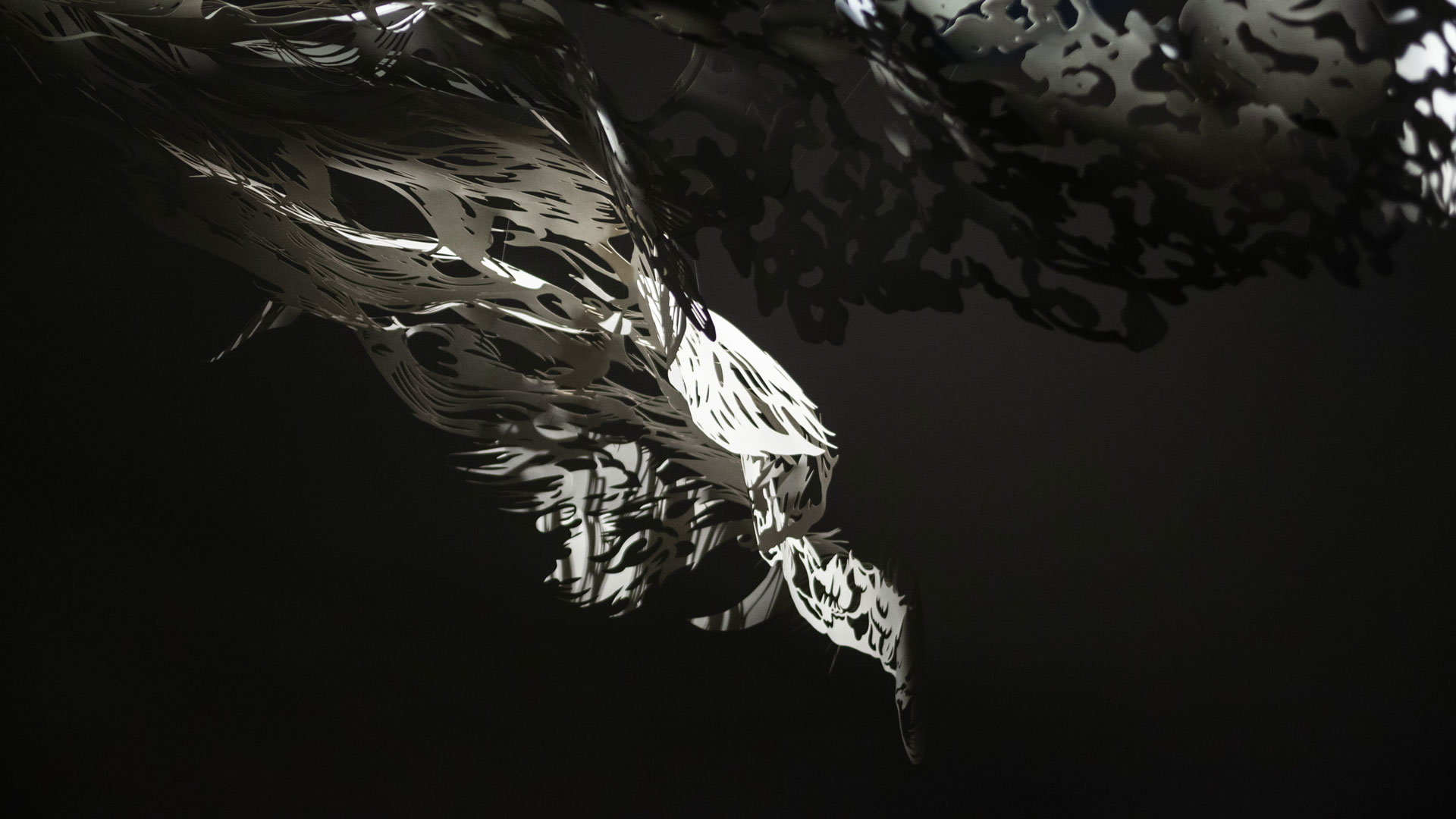 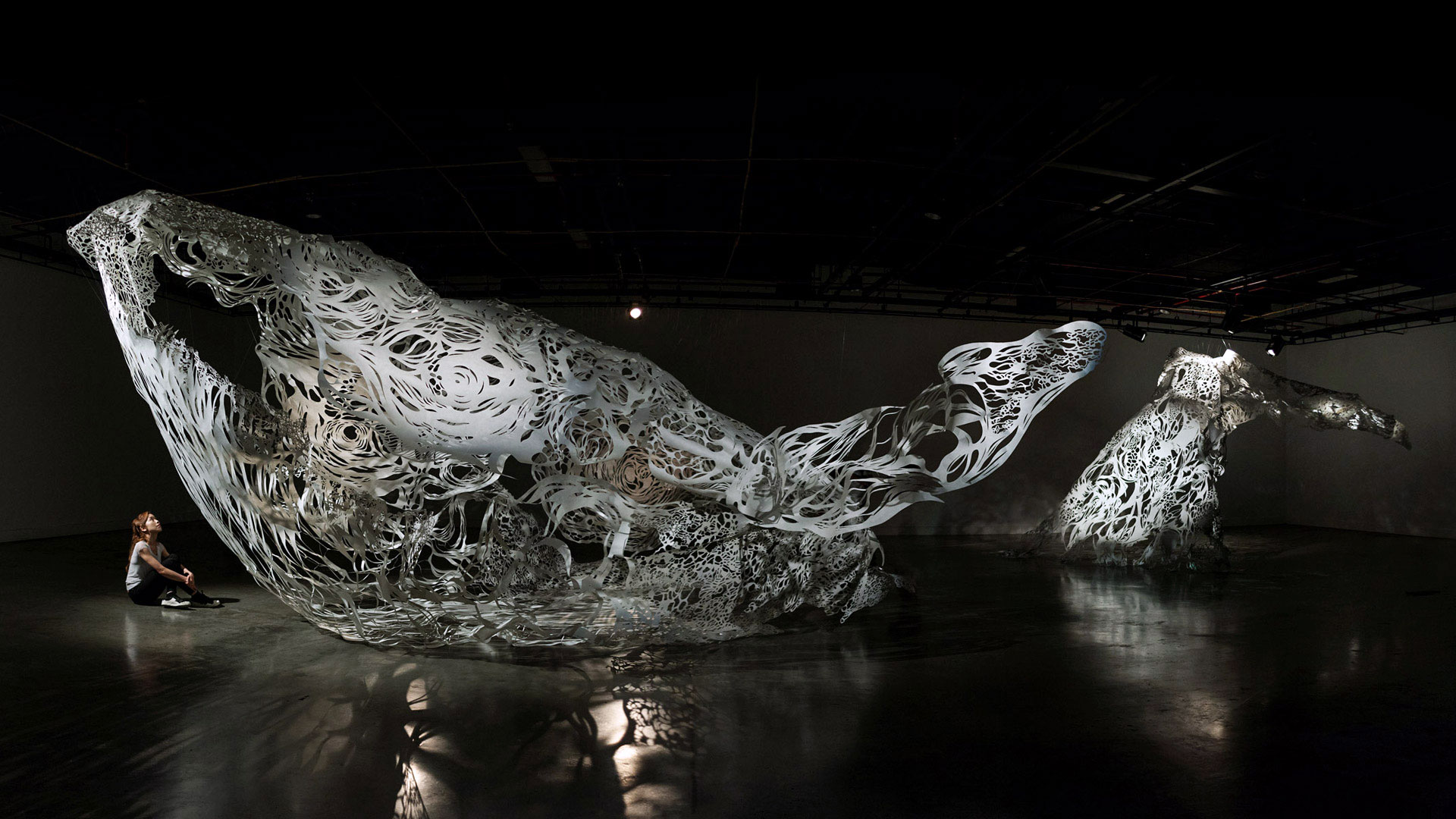 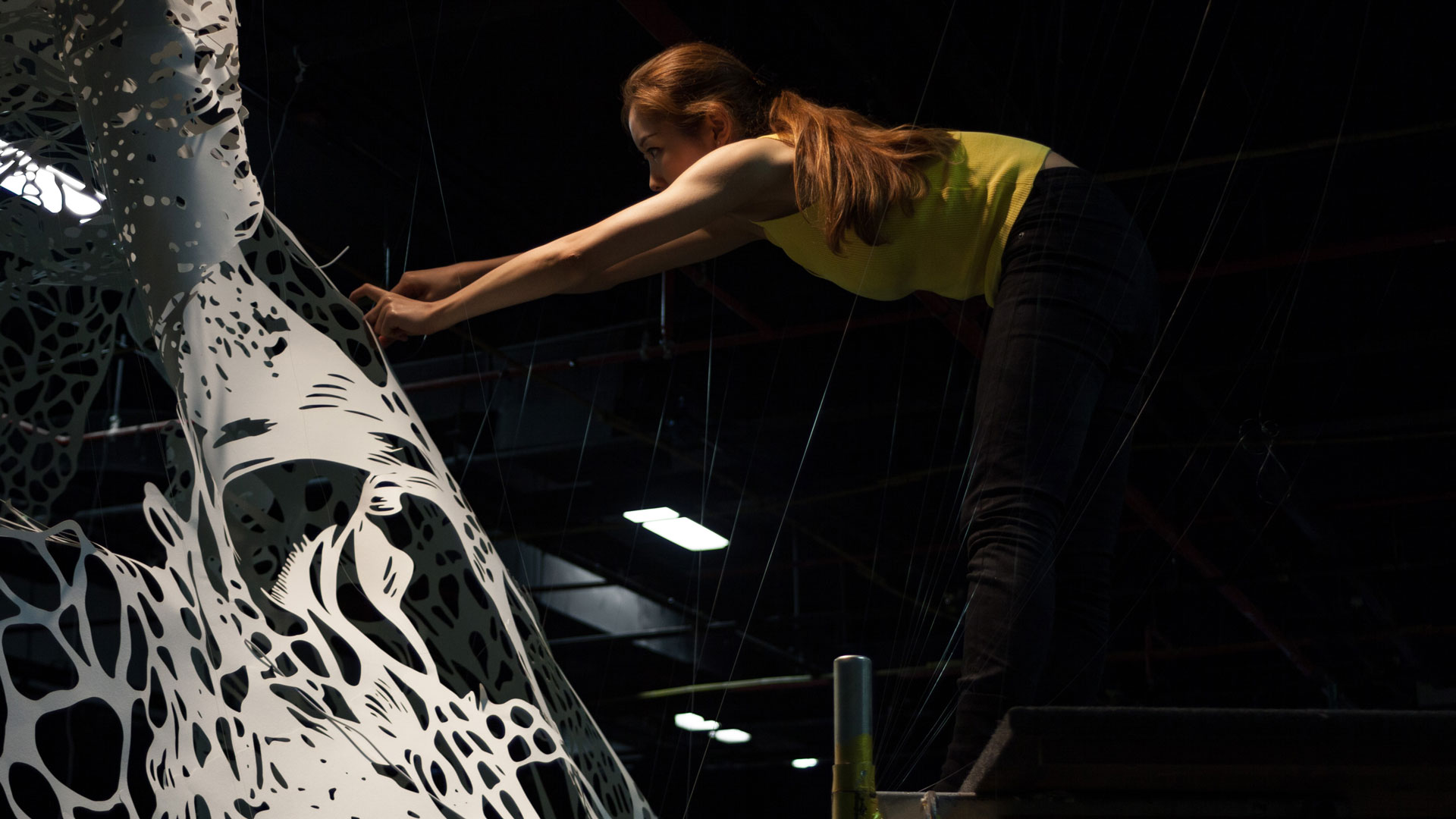 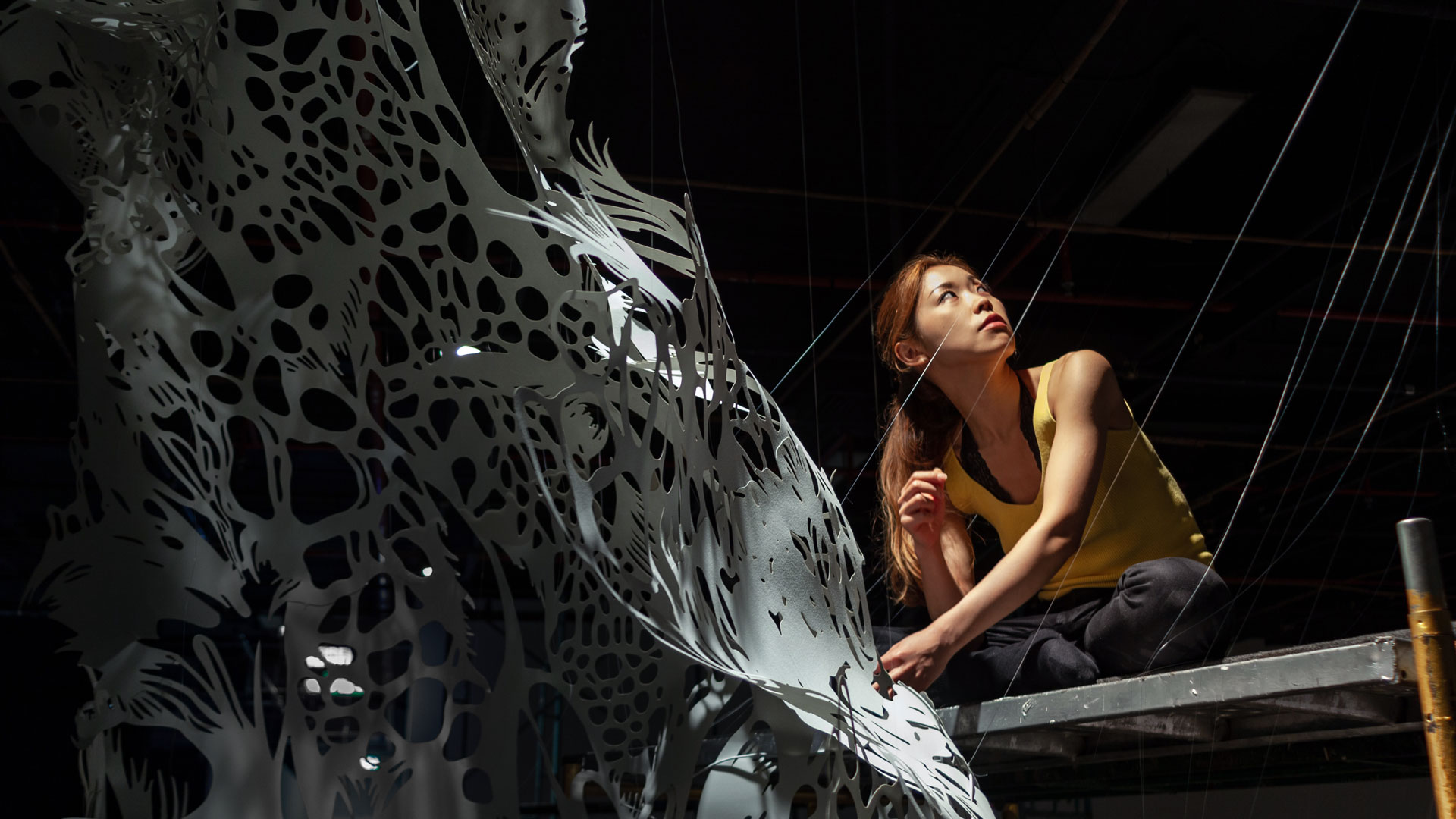 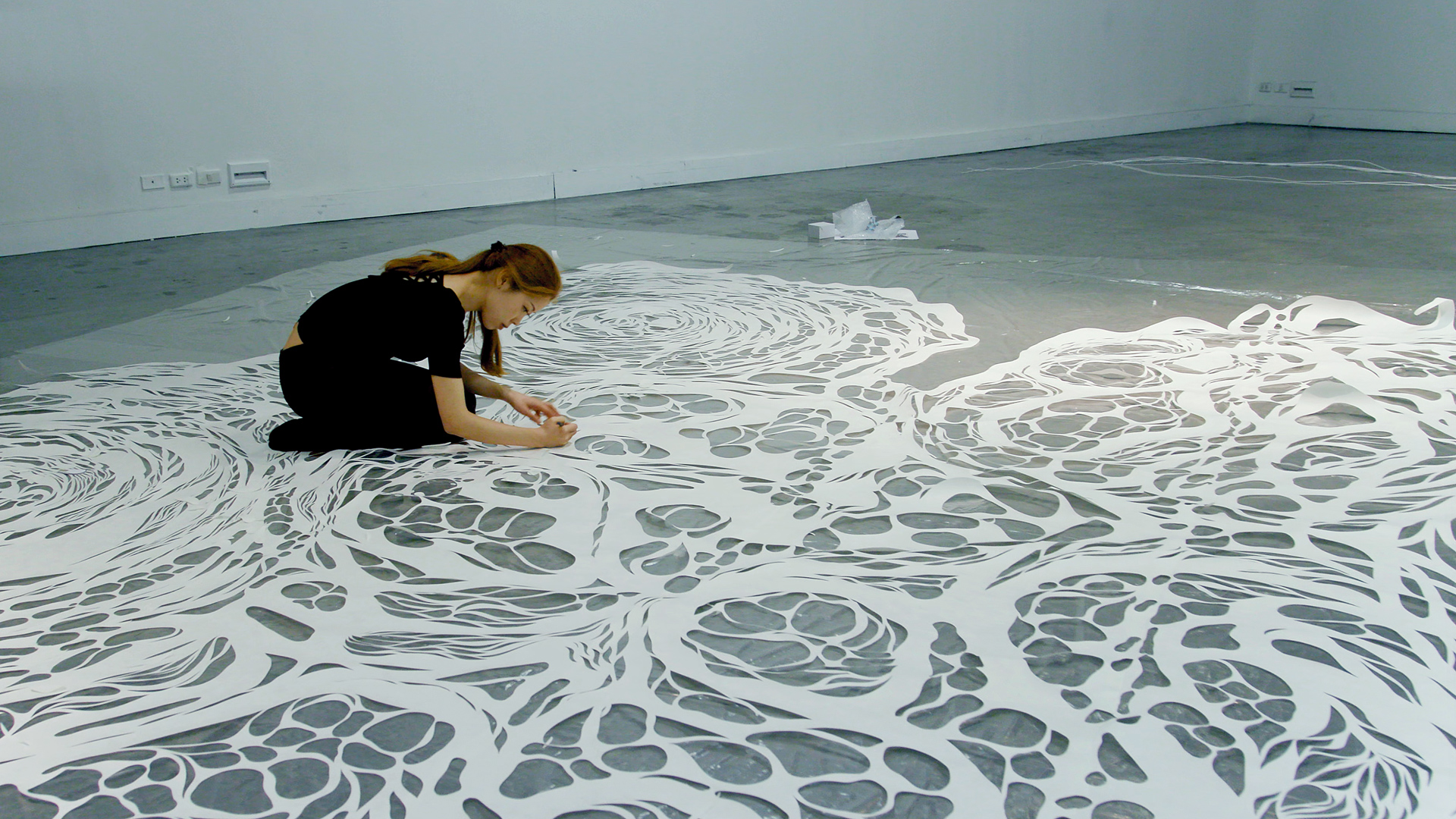 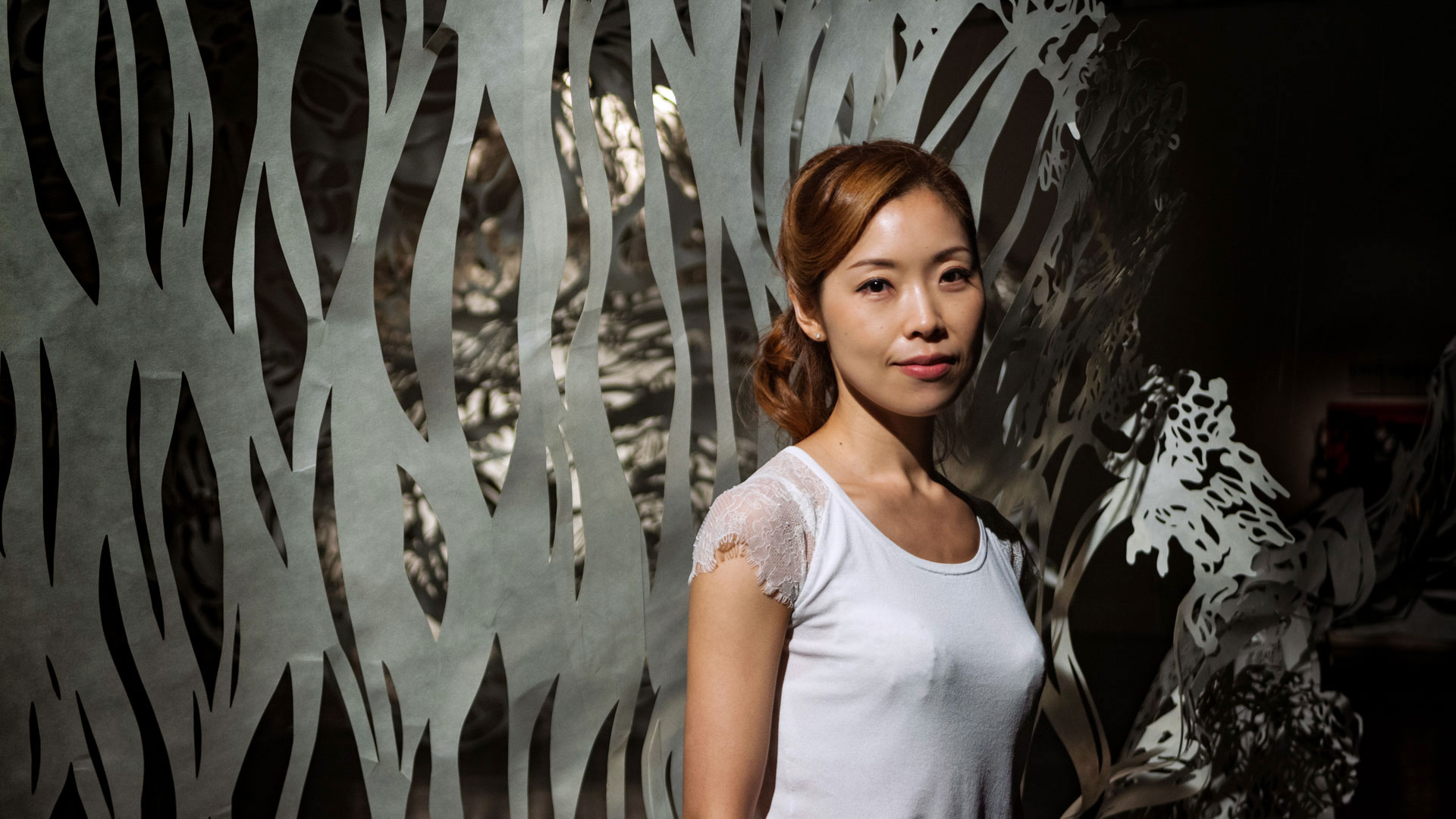 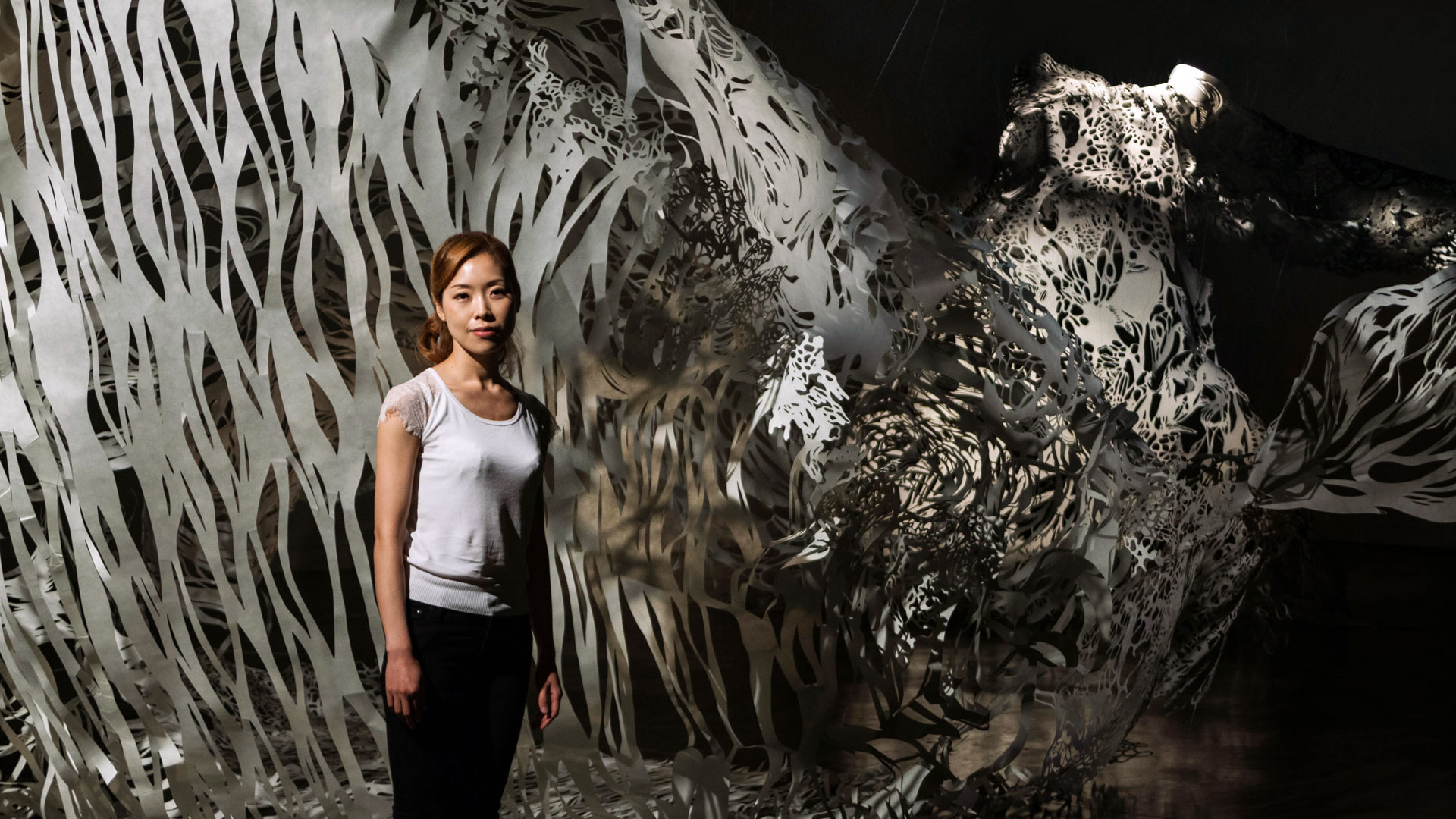 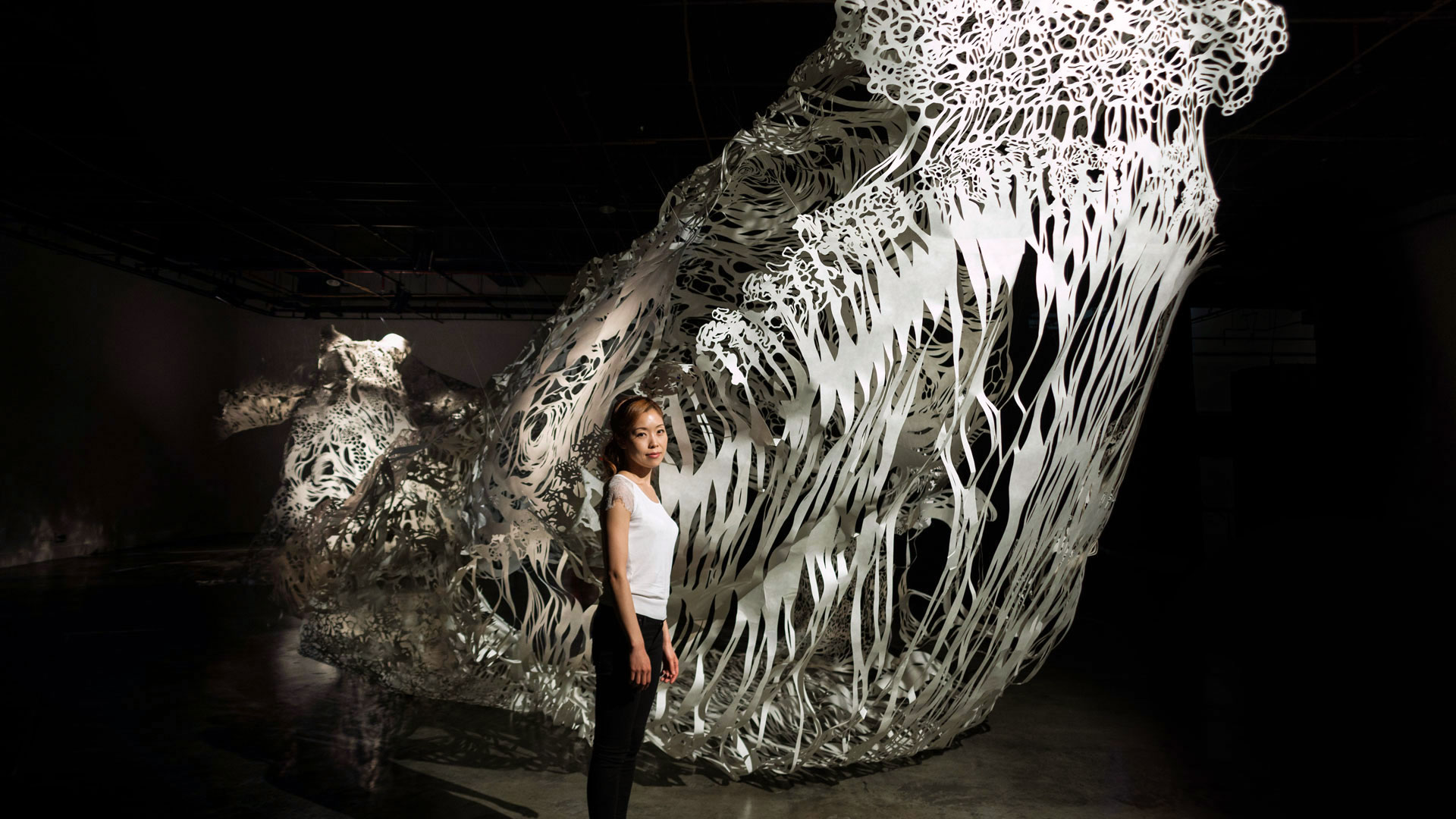 In October 2018 Nahoko Kojima unveiled her latest handmade Paper Cut Sculpture, ‘Shiro’ at the Bangkok Art and Culture Centre in Thailand. This is the artist’s largest piece to date, a life-sized depiction of a 32m Blue Whale and her debut solo show in Thailand.

With thousands of daily visitors, the show was hugely popular with Bangkok art lovers and extended at the request of the venue due to popular demand. The goal for the artist was to reach some of the 168k eager followers of her facebook community, fb.me/papercutart.craft many of them in Bangkok, and show them her unique work in person.

Shiro took almost a year to create from concept to completion. Kojima saw the animal in Hawaii and after months of drawing and research into the behaviour and environment of the animal she started to draw her largest piece to date. The artist was adamant she wanted to work to actual life scale so that people could experience the true majesty of the largest mammal on the planet.

The name Shiro means ‘white’ in Japanese because when she saw the Blue Whale, Kojima thought the the animal actually looked white. Kojima had Japanese Washi paper custom made for her in especially large sizes from a paper mill in Japan and took months to cut the two flat sheets based on her drawings in her Central London studio. Kojima is known to alter the designs as she cuts them, in effect making it impossible to recreate similar works by digitising and mechanising drawings alone. She prototyped Shiro first, using nylon threads to tie the single sheets, eventually arriving at a form that matched her vision. As with all her pieces this artwork is based on the artist’s concept of ‘Hidden Beauty’ with stories and narrative secretly intertwined in the body of the animals she depicts.

In order to ship the work to Bangkok, the artist cut the finished sheet into clean squares which were rolled and then reassembled on site back into a single sheet. The key for Kojima was that the art was made using one continuous drawing in order to maintain a link to traditional Kirie even when hung as sculpture.

Nahoko Kojima has been described as a force of nature in Japanese Kirie, cutting designs by hand and refusing to cut the same thing twice. She has been making paper cut art since the age of five and is now at her creative peak, tirelessly inventing and developing processes, working professionally as a paper cut artist for over a decade in London. She is best known for her pioneering sculptural works that push a traditional Japanese art form of Kirie into the contemporary sphere and her goal is to see it legitimised as an art form in its own right globally.

Many cultures have traditions of paper cutting sometimes linked to religious motifs or other symbols. In Japanese Paper Cut, Kirie, there are two very simple rules, firstly to cut from a single sheet of paper and secondly to make work by hand. Researchers can actually tell the difference between the work of different artists based on the strokes of the cuts, not just the drawing style.

Nahoko Kojima shows little interest in political or topical allegories, instead preferring to focus on more timeless concepts of change, nature and the seasons. Her most iconic pieces are The Cloud Leopard (Saatchi Gallery London, 2012), Byaku Polar Bear (Jerwood Space London, 2013) and Washi Bald Eagle (Ford Presidential Museum, Michigan 2014). Commentators have noted they are all endangered species however the artist refuses to explain the works and insists on people looking and interpreting the hidden meanings in the art on a personal level. Kojima wants people to fall in love with her subjects, with life size depictions and designs in the art that are based on real stories of their daily lives which are fascinating for the artist. This innocence of discovery and human first approach is an integral part of Kojima’s works.

Kojima currently lives and resides in London, working from her studio in Bermondsey and her art sits in Museums, Galleries and also sells to private collectors. She occasionally engages in corporate cross-overs, most notably her year long Doves & Hearts Bridal Art Campaign for the luxury Italian LVMH brand, Bulgari, in over a 100 stores across the entire Asia region in 2015.

Find out more about the Nahoko Kojima’s art at www.nahokokojima.com
For press and work related enquires contact www.solokojima.com
To get involved with paper cut art follow fb.me/papercutart.craft

All text and photography is © Solo Kojima, 2018. You can re-share alike on your blogs with credit ‘via solokojima.com’.